Home >> Cloth Diaper Myths >> The Bad, The Worse, and The Ugly: Why We DON’T Use Homemade “Detergents”

The Bad, the Worse, and The Ugly

So WHY are we calling this ~The Bad, the WORSE and the Ugly~ and why is Detergent in quote marks? Homemade concoctions are most often combination of water softeners (borax, washing soda, baking soda), boosters (oxi) and soap (grated or melted of various brands and types). Some go so far as to not include any cleaning agent at all. Let’s go over the fallacy of using this combination to wash LAUNDRY (and this really goes for ALL laundry, but most especially laundry which needs to be absorptive, cloth diapers and towels).

It doesn’t rinse clean! Bar soap is just that, SOAP, it is not meant for laundry, it’s not intended to wash clothes in a washer, the bar soaps, even the ones in the laundry aisle, all say they are a pre-treater or booster, NOT a detergent. Over time soap scum (think bathtub ring) will trap particles of soil in the fibers of your clothes, because soap is oil based and does NOT rinse clean from cloth fibers. The physical bulk of most versions of homemade soap is made up of water softeners and boosters!These items do have a purpose, but it is NOT to clean, it is to allow the cleaning agent to function better at it’s job.

The softeners, do just that, they soften hard water, which allows the cleaning agent to pull out and trap soil. Boosters aid the cleaning agent by providing a secondary ‘power’, like whitening and stain lifting. The problem with this is, the ratio of cleaning agent (soap) to a very large amount of softeners and boosters. You end up with little cleaning power and lots of softening and boosting power, which does NOTHING to clean poop, pee and bacteria out of your diapers (or everyday soils our of your regular laundry.)

Here we come to the catch 22………Recommended Use Amount!

Scenario 1: Most recipes are going to recommend a tiny amount per load. In the 1-2 Tablespoons range. The amount of actual cleaning agent (the soap) is a minuscule ratio of that tiny 2 Tbs by the time it’s mixed with all the softeners/boosters. Nothing is going to get clean, diapers or regular laundry, because there is very little cleaning agent present. Add to that gallons and gallons of water and you might as well not even be putting a cleaning agent IN! In fact, the total amount of actual soap given in this recommendation comes to 1/40th of a TEAspoon per gallon of water!

Scenario 2: Either you throw the recommended use amount out the window (because it doesn’t make sense given Scenario 1) or your recipe is one of the very few which recommends more. Now you are using a cup or more of this mix, which is going to have a decent amount of soap in it. Over time soap scum and trapped soil, discussed above, will begin to cause issues with towel absorption or making your clothes dingy, but it will most likely eventually happen. In the case of diapers especially, it can cause repelling, barnyard, ammonia and/or rashes from the bacteria and scum left in the diapers. It may take months for it to build up and for a time you may think this stuff is the greatest thing since sliced bread……….it’s NOT, and it’s very, very likely you will have significant problems crop up down the line.

WHY is SOAP so different than DETERGENT? Don’t they do the same thing?

Yes and no. They do, in a sense, when they are used for their intended purpose. They are both meant to remove soils and bacteria when aided by friction and water. The difference is…………Soap is meant to be used on generally non-porous surfaces that have no nooks and crannies to trap soil. Detergent is formulated to work on cloth, a very porous and textured material, it is also formulated to trap soil and suspend it in water where it can be literally washed away.  Soap and detergent work VERY differently and are formulated very differently for different purposes.

If you would like to delve more into why soap and detergent are different please take a look at these links:

Why is the use of Homemade Soap so prevalent and often recommended by others?

It is viewed as inexpensive!

Many people cloth diaper for budgetary reasons and there is much appeal in being able to use something you can spend less money on. This is understandable, and a good portion of CD mommas have fallen into the same trap of thinking it was an easy and effective way to save money………especially if they also fell into the well-laid trap of needing to use only so-called “Cloth Diaper SAFE” detergents and on ALL their clothes, not just diapers. That stuff is EXPENSIVE, so it’s easy to see the appeal of a cheaper option.

It’s considered by many as CD safe!

It’s NOT, as discussed above, and neither are many of the promoted and popular CD safe detergents (many of which have the same issues as Homemade varieties).

It is viewed as containing no or fewer chemicals!

Let’s begin with, ^^^ this is flawed logic………Everything is made up of chemicals; everything has a chemical makeup. It is much more accurate to say that some things are made up of dangerous chemicals, unnecessary chemicals or man made or altered chemicals. Some people have a priority to minimize their family’s exposure to those chemicals they are unsure of, and that is ok and it’s their prerogative to make that choice………..BUT there are options within that scope that do NOT include Homemade Soap.

What are the alternatives?

Always wash in HOT water with plant-based detergent and always use a water softener if water is at all hard, even mildly.

If the draw of Homemade Soap was the low cost factor, there are several inexpensive options on that front as well. Purex and Foca have proven to work for many people and are far less expensive than many other well known commercial detergents.

To learn more about what goes into mainstream detergents, please read:

What’s In My Detergent?

Think your Homemade mix is WORKING?

Member Holly Couey says, “This is a picture of the water in my garden bath tub after stripping clean clothes that I had been Washing with homemade laundry detergent for over a year. They smelled clean right out of dryer but after a while they would stink.” 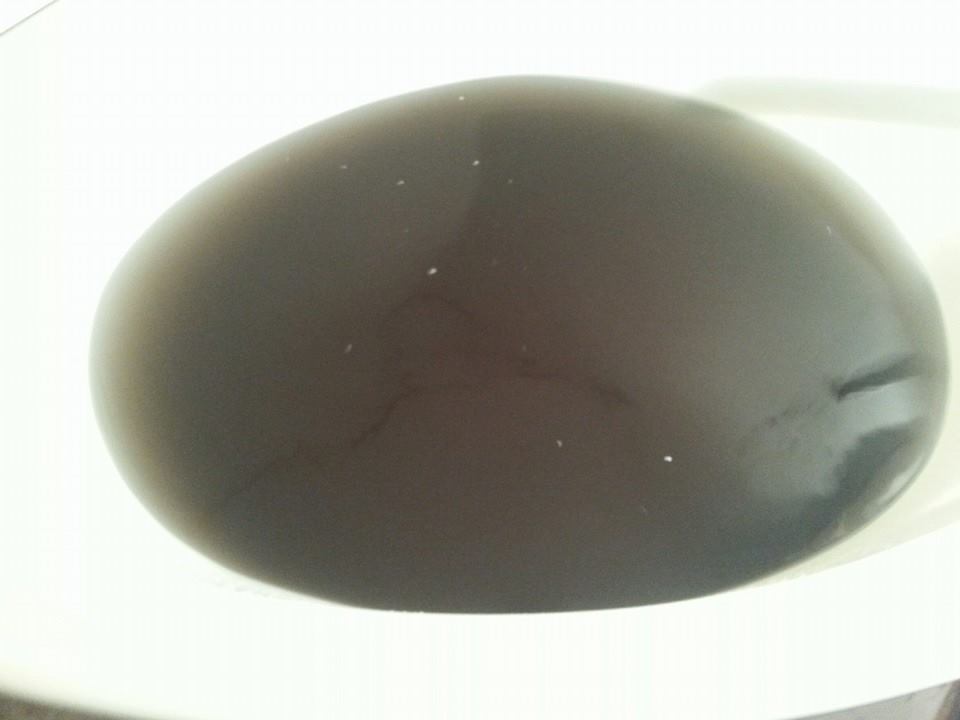